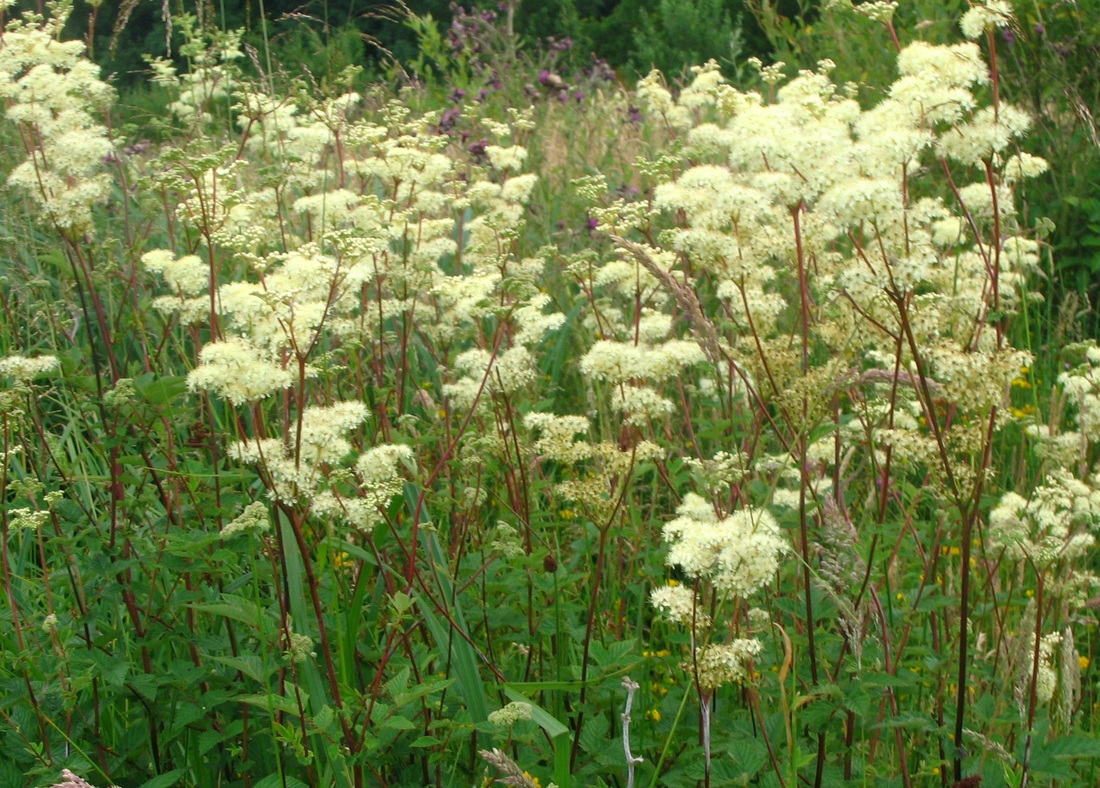 Meadowsweet has been known by many other names. In Chaucer’s The Knight’s Tale it is known as Meadwort and was one of the ingredients in the popular drink called mead. It was also known as Bridewort, being used in churches for weddings and festivals when it was customary to strew floors with rushes and herbs (to give warmth underfoot and to overcome smells and infections), often being made into bridal garlands. It was a favourite of Queen Elizabeth I.

The herb has a very long traditional history as a healing remedy. It was regarded as sacred by the Druids. The famous 17th century English pharmacist Nicholas Culpeper mentioned the use of meadowsweet to help break fever and to promote sweating during a cold or flu. Herbal references indicate its uses as a diuretic and as an antacid for stomach complaints, including heartburn.

In 1897 a German chemist, Felix Hoffmann, was adding the acetyl group (CH3CO) to all sorts of molecules, with the hope of improving the strength or decreasing the toxicity of physiologically active substances. He acetylated salicylic acid, which was derived from willow bark and certain other plants. Salicylic acid was in common use to reduce fever and pain, but it produced side effects, including stomach irritation, and some patients were simply unable to tolerate it. Hoffman’s new drug was given the name Acetylsalicylic acid, which was shortened to Aspirin by his employer, Bayer AG (‘A’ from acetylsalicyclic and the old botanical name for Meadowsweet, Spirea ulmaria).

It is medically accepted that aspirin can irritate the lining of the gut and cause bleeding, yet willow bark, meadowsweet and other salicylate-containing herbs are commonly used by Western herbalists. This is because the whole herb provides a complex mix of healing properties that create balance, whereas the isolation of a single chemical results in side effects; aspirin causes the very problems (stomach irritation and internal bleeding) the whole herb is used to relieve.

Meadowsweet reduces acidity and calms the stomach, being used by herbalists for gastritis, heartburn and peptic ulcers. It increases secretion of digestive juices, helping to relieve indigestion, nausea and bloating.  The herb’s gentle astringent action makes it suitable for cases of diarrhoea.

Although meadowsweet itself hasn’t been granted a Traditional Herbal Medicinal licence, a claim has been approved for a product where it is combined with gentian root and euonymous bark. The accepted claim being that this herbal remedy is effective for “the symptomatic relief of indigestion, heartburn and flatulence, based on traditional use only”.

Mentoring at the NNA

Our successful mentoring scheme, with monthly Skype calls helps recent graduates and final year nutritional therapy students to set up in practice, build up confidence and hone their clinical skills.

We help recent graduates and final year students every step of the way. Setting up in practice, building confidence and improving clinical skills.

Continue to update your professional knowledge and improve professional competence throughout your career with our online CPD system.